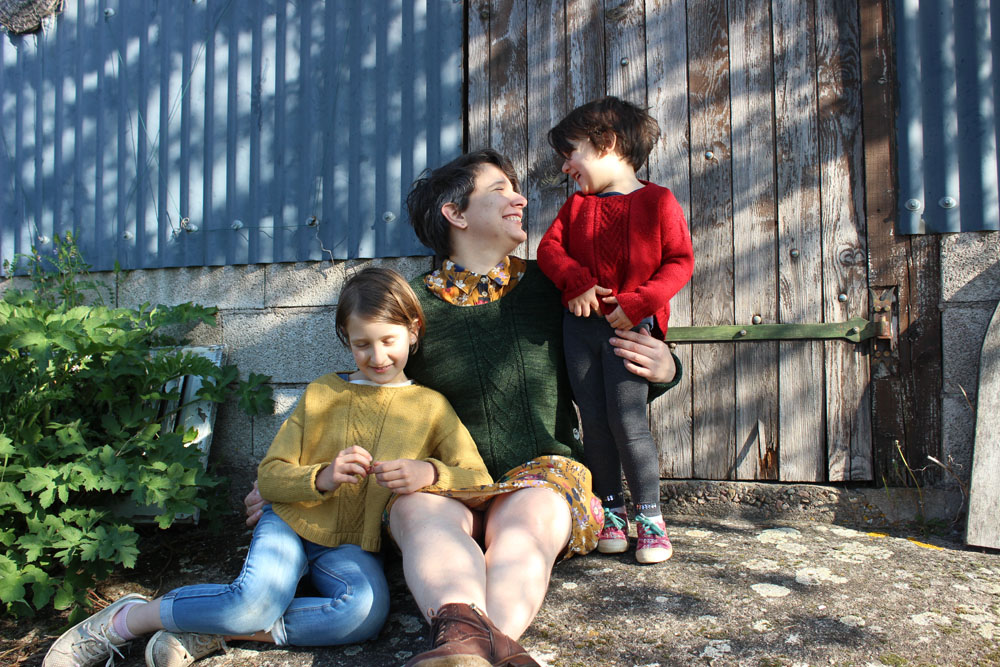 I love them very much, so much that all the girls in our family have one

I started dreaming it up early in 2018, with an idea of an unconventional construction. I let it sit in my mind for a while, to think about its proportions and the sequence in its construction, before laying a small drawing on paper then beginning a first sample.

At first, I dreamed about this sweater for myself, but as the construction is unconventional and to be sure it worked without having to undo long hours of work, I decided to try it first in a child size.

For the yarn, I asked La Bien aimée if they could like to partner on this design. I used one of their base, Merino Sport, in the colourway San Tokki, for my first sample. Actually, I even made two of them : one for La Bien aimée’s shop in Paris and one for my daughter Madeleine (and as a craftfair sample).

The construction working like I had envisionned it, I graded the child pattern and published it in January 2019. Even before the publication, my testknitters were asking me whether I would make an adult patterns. The children one was well received when I published it and durong the following Spring craft fair i attended, the requests for an adult pattern kept growing stronger…

Actually, I had already started working on the adult version since the end of January, in partnership with La Bien Aimée,using the same base Merino Sport, in a lovely green colourway Jonna. I even had finished to knit my sample when Knit Eat happenend in April and I had already strated to wear it.

Grading, writing and translating it, then having it tech-edited then tested took a while (almost to the end of the year) and I finally published it last november.

The warm welcome you made for this new pattern really warmed my heart ! It feels really good to see and know that you love one of my design for which I worked during months. Thank you !

When I published the children pattern, Capucine (a little envious of her little sister) asked me to make one for herself. So I knitted one for her last summer. As Madeleine had outgrown the previous one, I followed by knitting another one for her too !

Those 2 new projects of the Campfire sweater have been made using De Rerum Natura Albertine yarn. It’s a very nice yarn, good for well defined cables. The 10% silk in the blend brings a little bit of shine and drape to the sweaters. I really like it !

This winter, all 3 of us have worn our sweaters a lot and I ‘m seriously thinking about knitting others… I might have some nieces to spoil…